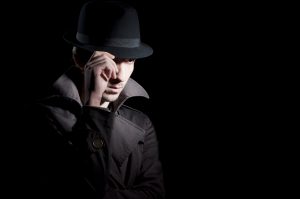 Who doesn’t love to read a good “whodunit” mystery once in awhile? This ten question trivia quiz is about fictional private investigators whose exploits to catch nefarious villains have captivated avid mystery fans for years. How many of these masterful sleuths can you remember? The answers follow immediately after the quiz.
1. Perhaps the most famous fictional sleuth of all, this brilliant, eccentric Londonite seemed devoid of emotions and social graces. He unraveled countless diabolical plots and seemingly unsolvable crimes with the aid of his often flabbergasted but always loyal assistant.

2. The world was first introduced to this hard-boiled, square-jawed Chicago police detective in a 1930’s comic strip. He pursued criminally insane villains with such crazy nicknames as Flattop and Pruneface. He had futuristic gadgets on his side like his famous 2-way wrist radio.

3. Mystery maven Agatha Christie created this fastidious Belgian detective in the 1920s. His signature attribute was his little black moustache. The public became so enamored of his methods and great skills of deduction that Christie included him in 32 more mystery books and many short stories over the course of 55 years.

4. This savvy and sophisticated teenage detective is the heroine in a classic series of mystery books written for girls. The first book came out in the 1930s. Since then, this inquisitive fictional sleuth has been a positive role model for generations of young women.

5. Dashiell Hammett introduced the world to this hardened, self-centered private eye in his critically acclaimed book, The Maltese Falcon. This sleuth was far from a saint but readers knew that deep down this was a good guy in spite of his vices. Perhaps these vices made him best equipped to hunt down the sociopathic villains he pursued.

6. This accidental female sleuth was created by P.D. James in her 1972 book, An Unsuitable Job for a Woman. She inherited a detective agency and decided to keep it going, though clearly naïve to the world’s darker elements. She was shy but determined. This gave her just enough of an edge to keep the bad guys off-guard long enough for her to expose them.

7. This famous fictional Los Angeles private investigator was known for his cynical persona yet high internal moral compass. He smoked Camel cigarettes and drank like a fish. When not rescuing modern day damsels in distress and stalking bad guys he entertained himself with poetry and chess.

8. This famous fictional sleuth was first and foremost a clever defense attorney. He was an excellent judge of character. He always knew when a client was innocent or not and went to great lengths to expose the true culprits at hand in court. His methods often displeased those in the law enforcement community.

9. Agatha Christie modeled this inquisitive old spinster after her grandmother. This shrewd elderly lady was a keen observer of human nature. With knitting needle in hand, she exposed villains that totally befuddled the police detectives investigating the crimes she unraveled.

10. This famous fictional sleuth was created by two cousins in the late 1920s. They used his name for their prize detective and as the author’s pseudonym of the mystery books he was featured in. Early books even featured a” Challenge to the Reader” at the end to solve the crime since they now had the same information as the detective.

Locating a Missing Person: Knowing Where to Look